New York City Councilman David Greenfield surprised everyone Monday morning by announcing he won’t be running for reelection this year – but his fundraising numbers suggest he may have been considering the move for longer than he is letting on.

And with questions being raised about whether Greenfield timed his exit from the race so that he could handpick his successor – an allegation the councilman vehemently denies – a recent decline in his fundraising could undercut his claim that it was only two weeks ago that he had considered leaving the City Council for a new job at the Metropolitan Council on Jewish Poverty.

Greenfield, the chairman of the influential New York City Council Land Use Committee since 2014, was a prodigious fundraiser through 2014, 2015 and 2016, but his fundraising fell off a cliff in 2017.

But since Jan. 11 of this year, Greenfield has only raised about $53,000. His numbers became even more anemic the closer he got to his announcement that he would not run again, taking in only $5,000 between March 12 and May 11. And in his latest filing with the New York City Campaign Finance Board, covering May 12 to June 11, he raised just over $8,000.

Greenfield said his slower pace of fundraising was simply because he had raised enough money. "Once I raised enough to fund my successful campaign, I turned my efforts to helping other people," he told City & State.

Indeed, while most candidates amp up their fundraising as election day gets closer, slowing contributions as the race nears may just be Greenfield’s modus operandi. After raising more than $100,000 in 2011 and 2012, Greenfield raised just over $3,000 in all of 2013, the last year he was elected. Greenfield faced two opponents that year, though they were not well-funded, and he easily won with 82 percent of the vote. 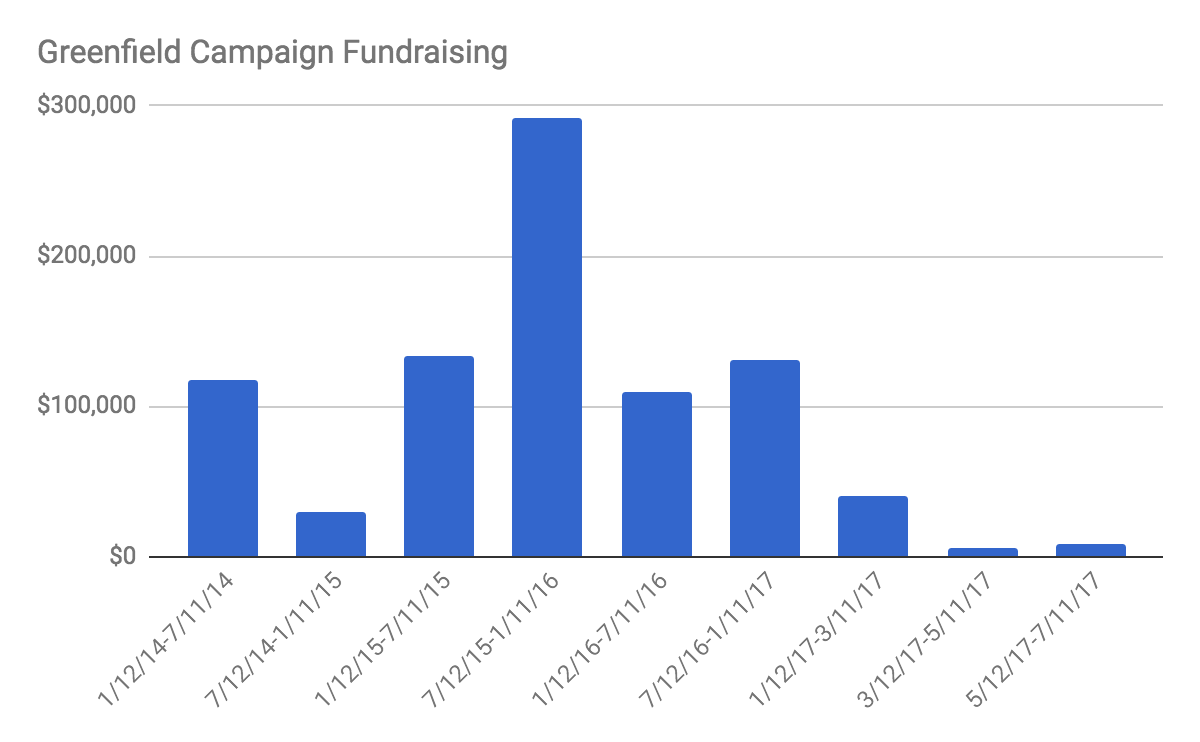 These numbers reflect only his city campaign fund, officially called Greenfield NYC. Greenfield has faced scrutiny for a separate campaign fund for state office, GreenfieldNY, which held more than $300,000 at the most recent disclosure period, in January. Greenfield had raised only $14,500 in that account between January 2016 and January 2017.

Until his Monday announcement, Greenfield was widely expected to run for reelection. He had no opponents challenging him for his 44th Council District seat covering Midwood, Borough Park and Bensonhurst.

Greenfield will serve out the rest of his term, then take the executive director and chief executive officer position at the Metropolitan Council on Jewish Poverty, an influential nonprofit still working to rehabilitate its reputation after its former CEO, William Rapfogel, pleaded guilty to stealing millions of dollars from the charity.

Greenfield told the New York Post that the hiring process for the Met Council job “started two weeks ago.” Similarly, the Daily News reported that he said he had been approached about the position only two weeks ago.

In an interview on NY1 Tuesday evening, Greenfield addressed concerns that he was circumventing the will of voters to install his ally Kalman Yeger.

“There certainly was no conspiracy over here,” Greenfield said. “This was something that wasn’t anticipated. We’d have to be significant idiots to say, ‘Oh, hey Kalman, you go campaign for two years in a different district, to collect signatures and raise money for that seat, go knock on doors, if there was a plan. There was no plan! This was a complete coincidence.”

Nonetheless, making the announcement this late in the race this year has political benefits for Greenfield and Yeger, his ally and former staffer.

As Greenfield will get a new job, so, it seems, will his former senior advisor. Yeger was previously challenging incumbent City Councilman Chaim Deutsch in the neighboring 48th district. After being approved Tuesday by a local political committee led by Greenfield, Yeger will now be running unopposed for Greenfield’s seat, with the support of a number of Jewish groups that hold considerable political sway in the district.

Good government groups have questioned the move, since it came too late for any other candidates to start an official campaign. As Citizens Union Executive Director Dick Dadey told the Daily News, “A lot of handpicking is going on that has resulted in no handpicking by the voters, and that's the real crime.”

RELATED: The five people who earned the most from Massey's campaign

Yeger’s campaign did not respond to a request for comment, but Jake Dilemani, a spokesman for the Deutsch campaign, said he was surprised by Greenfield’s announcement and Yeger changing districts.

“It caught all of us off-guard,” he said. But Dilemani was happy that Yeger was leaving the 48th Council District race. “God bless New York state ballot access laws,” he said.

The Met Council did not respond to a request for comment. A number of city and state agencies must approve all executive hires at the Met Council following the Rapfogel scandal, and the Forward reported on Monday that Greenfield’s hire had not yet been approved. But the Met Council board was enthusiastic about the hire, releasing a statement saying his “understanding of nonprofit management and fiscal responsibility will be an enormous asset.”

Editor's note: This story has been updated with a comment from New York City Councilman David Greenfield.